This page describes what's available in this release of Appian RPA. Some features and functionality may not be available if you're using an older version of the Appian platform.

Launch the task recorder in the new robotic process designer

Use additional actions, including conditions and loops

In this release, we continue to enhance the new robotic process designer's capabilities. You can now use additional actions such as Evaluate expression, Execute robotic subprocess (more on this below), actions with date fields, and all actions in the Image recognition module.

Each conditional action includes two flows where you can add more actions for the robotic process to complete if that condition is met. For example, the Is element present? action includes flows for both Yes and No, so you can easily build and visualize the possible paths.

Previously, loops were built into robotic processes by iterating through a list using a variable to keep track of its position and when to exit the loop. Now, you can easily configure an action group to repeat based on the number of items in a list, when a condition is True, or a static number of times to repeat. 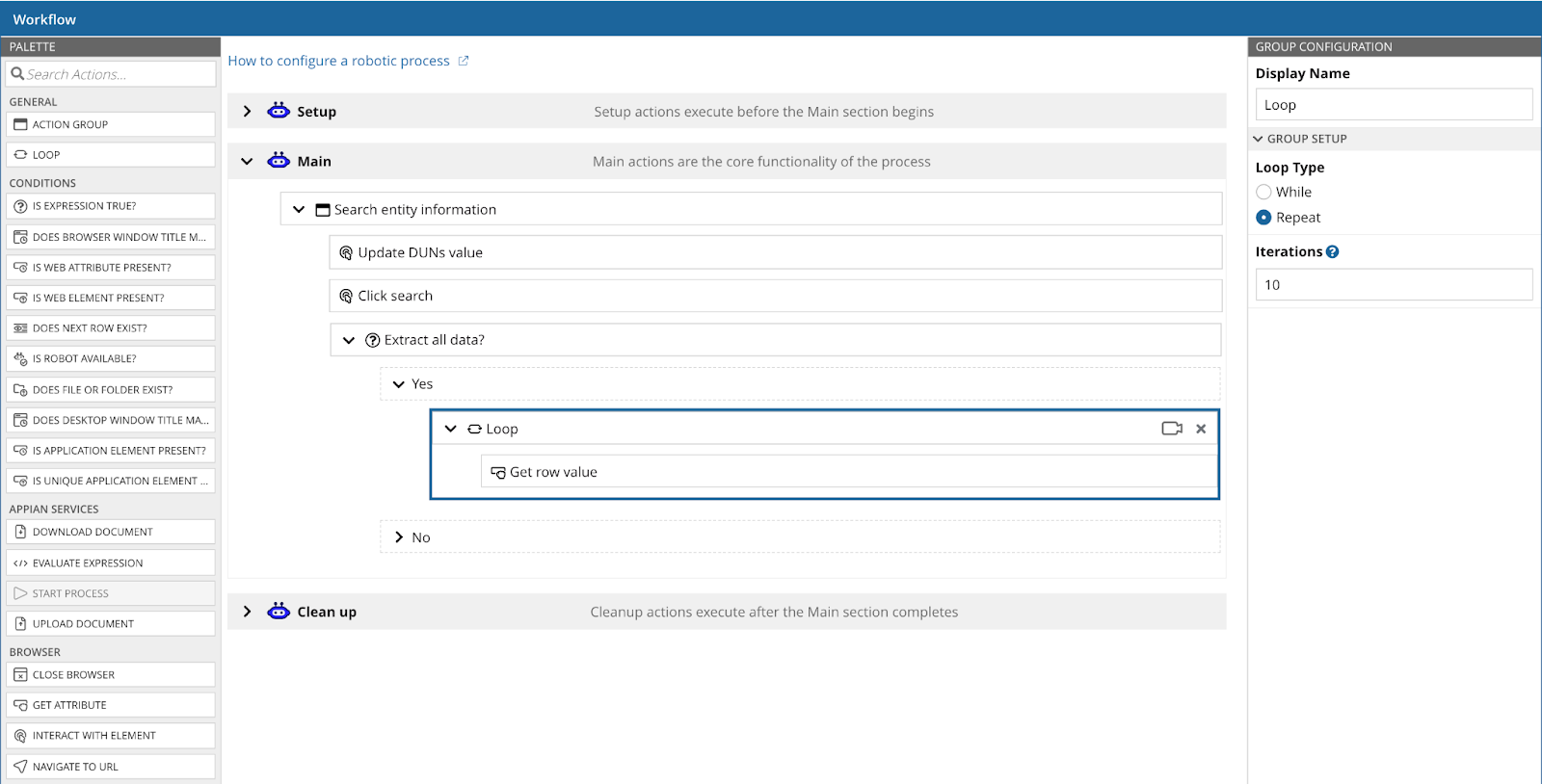 As your automations grow, you may find that you're building similar actions in the same order for multiple robotic processes. Rather than do this manually each time, you now have the option to call a robotic subprocess. Simply stated, this lets you execute a robotic process within the context of another robotic process.

Robotic subprocesses help you build reusable and modular robotic processes. With this design pattern, you can create these actions once and reference them in multiple robotic processes. This is a huge advantage for actions that can become cumbersome and time-consuming to maintain, such as login actions. Instead, you'll only need to make updates in one place.

You use Appian processes models to orchestrate robotic process executions. A key piece of this orchestration is to build pathways and other controls to help gracefully handle errors that may occur. To help you build more specific logic for error handling, you need the robotic process to return equally specific information.

In this release, the Execute Robotic Process smart service has a new default output that returns the section where the robotic process failed. This information helps you configure specific gateways in the process model for more graceful failure scenarios.

Appian RPA's task recorder helps developers of all skill levels build robotic processes quickly by configuring actions automatically. But if you choose to customize the selector that the task recorder picked, the tool is also there to help guide you. In this release, when you edit an action in the task recorder, the corresponding element is highlighted in the browser, allowing you to easily configure the most robust selector possible without ever leaving the task recorder.

This feature makes it easier to ensure you're choosing the right element as you edit recorded actions. You can be confident you're modifying the right selector value when selecting dynamic data or getting multiple elements. The task recorder provides this feedback to you in real time, reducing the need to debug or troubleshoot incorrect selections.

Appian RPA previously provided a Nexus code repository for sites created before September of 2020. Nexus was later deprecated as an RPA code repository with our 7.7 RPA release. With RPA 7.12, Appian RPA no longer supports Nexus as a code repository. Robotic processes using code in Nexus will stop working.

Appian RPA is a feature of the Appian platform, but its releases are independent from the rest of the platform. This release process allows for more rapid development so you get access to new features, bug fixes, and improvements faster. Some of these updates may rely on feature availability in Appian. Therefore, if you're using an older version of the Appian platform, Appian RPA may not be able to take advantage of those features.

In these cases, you may not have access to some of the latest features prior to upgrading Appian. Your robotic processes will continue to work the same as they have been.

We want to be clear when some of these features may require a more recent version of Appian. This page describes each release version and date, and contents. Where applicable, we'll also note where certain features might not be available for older versions of Appian.