This page describes what's available in this release of Appian RPA. Some features and functionality may not be available if you're using an older version of the Appian platform.

Import low-code libraries from the AppMarket

Want to do even more with low-code RPA? You can now download additional low-code libraries from the AppMarket and import them directly into the RPA console. No Java required. Take a look at the available RPA libraries for you to choose from.

Java developers, are you interested in seeing your name on the AppMarket by contributing to our growing list of low-code RPA libraries? We've streamlined the library export process as well, so it's easier than ever to go from developing a library to published listing.

Build with focus and confidence

We've updated the robotic process designer to improve your development flow. There's now just one save button at the top of the designer, making it easy to quickly save progress as you build the workflow. Similar to other object designers, Appian will also prevent you from leaving the page if you have unsaved changes. We've also moved robotic process variables and the workflow to the top of the page so you can focus directly on building automations without having to worry about less important configuration.

We've reduced the number of keyboard methods so you can spend less time looking for the right method and more time building your automation. We took over 40 low-code methods and combined them into just 2 easy-to-understand options (with all the same capabilities), so working with keyboard actions is even easier than before.

In some robotic processes, you may want to pause after submitting a form to allow the application to process the request. Or you'll want to take a screenshot before moving on to the next page. In this release, every low-code method supports these two options directly using the new After Completion options. You no longer need to add another action to your workflow, saving development time and making your workflow a bit simpler. 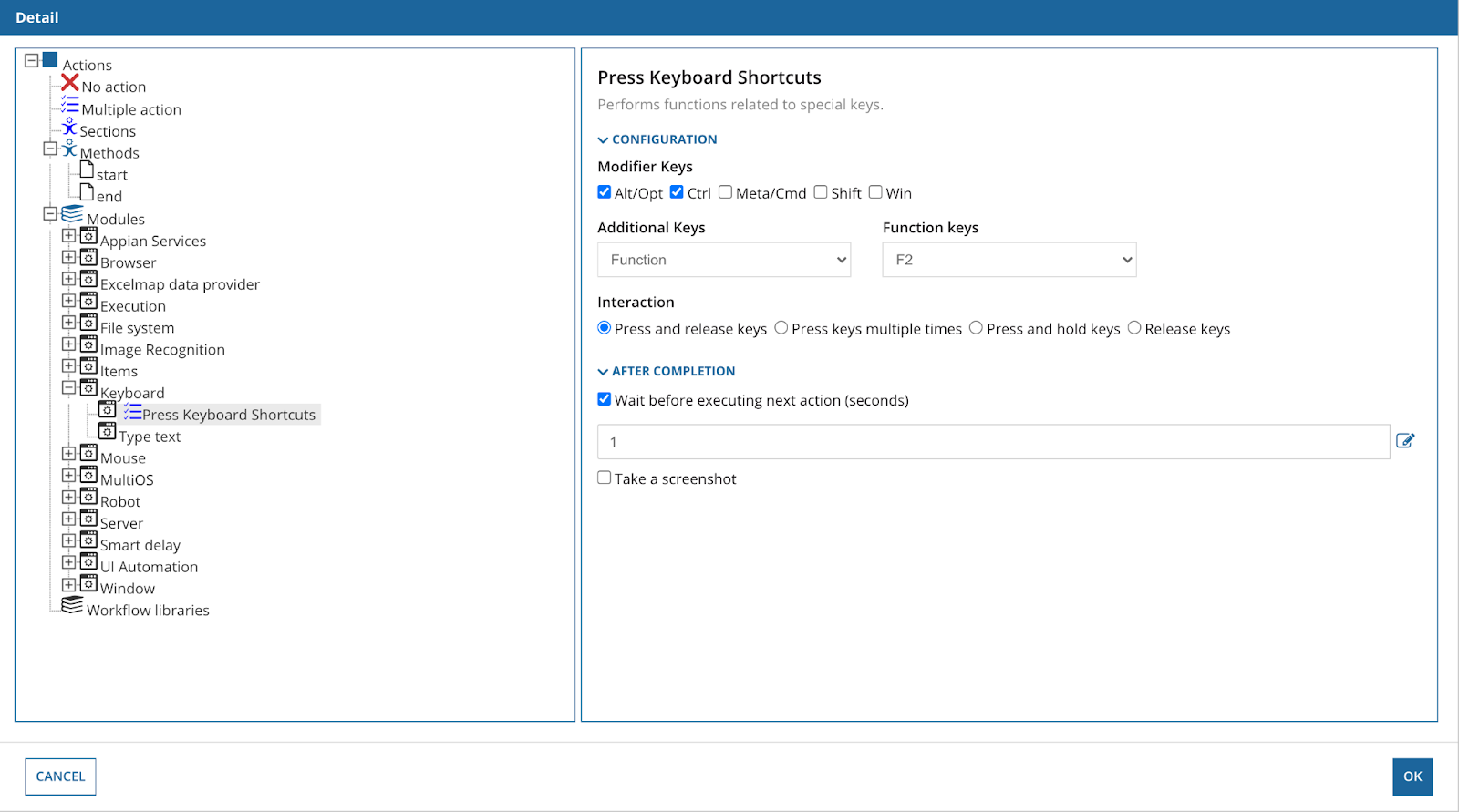 The features listed below are deprecated and will be removed in a future release of Appian. Do not begin using deprecated features, and transition away from any prior usage of now deprecated features. Where applicable, supported alternatives are described for each deprecation.

Appian sites created prior to our 20.3 release came with the Nexus repository for storing Java code. Appian now has its own code repository to store Java code, which is much easier for developers to use. As of the 7.7 release, Appian RPA is deprecating the provided Nexus repository. If robots are relying on this repository, follow the steps to migrate your code from Nexus to the console repo.

Instead of the File type, designers should use the Document type (added in version 7.6). Appian Documents are better for memory usage within Appian RPA and they integrate better with your applications.

Appian RPA is a feature of the Appian platform, but its releases are independent from the rest of the platform. This release process allows for more rapid development so you get access to new features, bug fixes, and improvements faster. Some of these updates may rely on feature availability in Appian. Therefore, if you're using an older version of the Appian platform, Appian RPA may not be able to take advantage of those features.

In these cases, you may not have access to some of the latest features prior to upgrading Appian. Your robotic processes will continue to work the same as they have been.

We want to be clear when some of these features may require a more recent version of Appian. This page describes each release version and date, and contents. Where applicable, we'll also note where certain features might not be available for older versions of Appian.

This version of the Appian RPA documentation was written for Appian 21.1, and does not represent the interfaces or functionality of other Appian versions.
Open in Github Built: Fri, Sep 17, 2021 (04:05:09 PM)